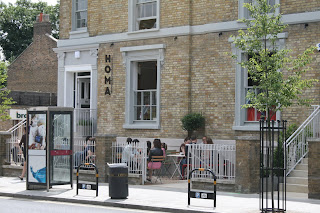 I used to like the pizza place on the raised ground floor of what was called "Booths" on Church Street. But since the food inspectors found unsavoury things in the kitchen I've been banned from going. So it's a relief that something new, and hopefully good, has now opened up in it's place. Homa, just opened, is a cafe and deli, with a restuarant downstairs. Will report back once I've tried it out.
Posted by Unknown at 12:53